Hello, friends and interested strangers. With the dawn of a new decade, I leave Time is your weakness behind me for a fresh page. This blog spanned most of the years I spent in Seattle, and as I am now safely ensconced in Michigan again, I figured I'd start over. I covered a lot of ground here, a lot of very sticky, constantly-shifting ground and perhaps at times I was too honest. Despite my best attempts at fulfilling my New Years Eve wish of total control, I expect I'll continue to jump to new conclusions, vent childishly and alienate those who I seek to draw nearer. So update your links/favorites/followings accordingly, or otherwise, thanks for listening.

I WALK ON THE OUTSIDE.

The End Times LPs have arrived and currently sit packed snugly in boxes in a corner of my library (yes, that’s right, we call the unheated back room of the house our library, because that’s where we put the bookshelves and the record collection) ... no covers made yet, as everyone’s favorite local indie screenprinter dropped the ball for me and I ended up having to make new plans, but thanks to the limitless patience of my hero Pat Bills we do have a finished design that will be produced in Nashville, Tennessee. Life is constant compromise, unless you’re a dick about it. There must be a lesson here somewhere ...

I’ve had a lot of time to think about this record, what it means as a document of the past three years, what it might have been if it had been completed as originally planned and whether or not any of that matters. Of course, it doesn’t matter. Outside of a small circle of friends, These Are The End Times will be accepted at face value as just another product, one more quiet shout in a crowded, impossibly noisy landscape overrun with more media than anyone can absorb, offered to the marketplace on a format only the most stubborn music fans cling to, but that’s okay. I’ve had several bands break up immediately after recording a full-length album, only to see our record labels (wisely) opt out of their promise to produce and distribute an unmarketable release from a defunct act with regional-at-best appeal. Would the alternative nation have embraced Lover’s Wrists, Fighter’s Wrists without, at the very least, midwestern touring and a continued loyal local fanbase? I don’t know, but I do hope Trixie Rex would have spelled my last name correctly on the insert.

This record was too important to shrug off. A physical residue must exist to prove we walked the earth. We can provide the interested with spectral versions of the songs for transitory enjoyment, but once the computers finally become cognizant and commit mass suicide for their part in mankind’s downfall (within our lifetimes, friends, believe it), MP3s will disappear as completely as any anonymous 15th century troubadour’s favorite tune, and with generations raised on instantly accessible information, do you think anyone’s memories are strong enough to retain that which was never necessary to retain? Compact discs litter the earth, and are considered by most these days as a disposable vector for sounds -- buy, burn and then stack, sell or destroy. But vinyl collectors, for all their faults, they keep their records, usually in alphabetical order and cased in protective plastic sleeves, even the titles they’ve never actually listened to, and when the revolution comes all we’ll need is a sewing needle and a paper cone to access the precious information locked in those mysterious grooves. Of course, you’ll ruin the record at the same time if you do that, but I think you see my point. 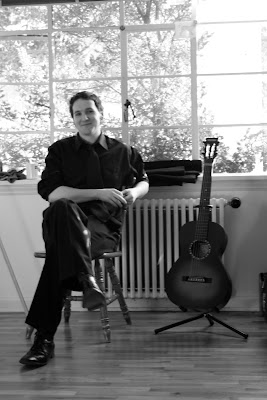 So when I consider this record, I must herald the contributions of my partner and friend Tyson Lynn, the quiet third of the band who contributed a bottomless well of moral support as well as the glue that held the whole project together even when the seams strained hard enough to bleed. While I provided the rhythmic skeleton of each song, Tyson was in charge of melodic counterpoint, and he did so with an ethereal, eccentric style of finger-picked slide guitar that complemented my own whatever-it-is better than anyone before, and I fear better than anyone to come. As with most of the best artists, he is largely self-taught, coming to the band with rudimentary skills but finding his own way to communicate through perseverance and dedication, developing a style of slide guitar closer to the gentle pluck of a harp than the sharp country twang most players seek. There were many crooked notes and jagged time signatures along the road, but Tyson always found his own individual melodies within the confines of my chords, and it’s only now that I can see that the true formula for the End Times wasn’t me and a broad plus Tyson, but me and Tyson plus a broad.

I’ve pontificated loudly and often about the importance of the feminine quotient of the End Times here on this stupid blog and in countless drunken bar conversations, and who could blame me? All of the singers we’ve worked with (in End Times, the Blacktree Singers and Desperado) have been fascinating women in their own utterly different fashions, and anyone who knows me knows how little I care for my fellow males ... other men, who needs them, all they do is get in my way most of the time, everyone knows that women are far superior as companions and confidantes, lovers and friends, partners and nemeses, nearly any relationship can be enhanced with an extra X chromosome. I mean, I get it, some men are beautiful animals with a special energy that can’t be ignored (believe me, I understand better than I like to admit), but far as I’m concerned there’s only one thing men have that women don’t, and I already have one. More importantly, writing for the female voice matured my songwriting in ways I never anticipated, opening me up to colors and shades I hadn’t been able to express before, and the very fact that I can write a sentence as seriously gay as this one without remorse should be sufficient enough testimony.

But the fact is that without Tyson, the End Times would have began and ended with Kate and I sitting around smoking cigarettes and telling each other the same amusing anecdotes over and over again for a few months before the whole project just floated away. Tyson was solid in a way that we were not, and his presence made us a band. His initial contribution was volunteering a digital four-track recorder to capture our first fleeting bleats, cementing what might have been just a passing fancy into something a little more official. When I learned he owned a lapsteel guitar, I invited him to bring it to the next session -- he demurred, saying he didn’t know how to play it, but I figured that as long as he could slide the bar up and down the neck and scrape his nails across the strings we’d have a little extra texture to our cheap little recordings. Tyson was indeed a rudimentary player, but as I stated before, he doubled and tripled his skills within the span of a year and before I knew it, he was good enough that I feared another band might snap him up. When Kate was no longer available to us, it was Tyson who convinced me that the sing/strum/slide lineup we had was worth preserving (after I quixotically considered replacing her with a choir or restructuring the project into an instrumental noise-fest ala Gone), and he was right ... I didn’t believe anyone else would be interested, but within twelve hours of placing an ad we had attracted Abigail, and within two weeks of that she was making regular bus trips to Seattle from Olympia for rehearsals, within another month she was living in town and working in the same office as me, and within three months we were back playing shows. It felt like fate and I like to believe that it was, but if not for Tyson’s belief in the band I would have probably allowed despair to swallow everything we had worked towards.

Tyson and I communicate largely through emails and text messages, as we both tend towards shyness and I suspect we share an ability to express ourselves more deeply with words (on that subject, he writes a very good music column for the Seattle P.I., even if there isn’t nearly enough metal coverage). I think I’ve already shared most of these sentiments with him, and I hope he isn’t embarrassed by my stating them so relatively publicly, but I thought it was important to do so at least once. I promise it won’t happen again, because my New Year’s resolution is to stop telling people how I feel about things. From now on I’m saving it all for the stage.

Today is Friday.
Posted by fc at 5:09 AM 2 comments: Links to this post

I woke up in a cave
Surrounded by broken skulls and pine needles
I saw strange electronic equipment stacked against one wall
The technology obviously highly advanced
But each piece was scratched by rust and decayed by time
A shaft of sunlight stabbed through a hole in the ceiling
But it would not reflect against the dull, grey metal
The craftmanship it took to make these machines was apparent
Imagination combined with a supernatural understanding of science
And then the neglected fruit went unused underground
Until I came along

Via findagrave.com.
Posted by fc at 11:40 AM No comments: Links to this post

Push it. Then push it again. All of your dreams will come true.
Posted by fc at 5:47 AM No comments: Links to this post

Minor rehauling of the official End Times website to make way for no-cost MP3 downloads of each song from our debut LP, These Are The End Times, still expected to become available at the beginning of 2010. Test pressings sounded fine, so I'll have half a thousand recds on my doorstep sometime in the next week or two. More soon, of course ...

Jeni Lee Richey and The Great Tribulation have three shows lined up for January and February, including the first annual Mark Lansing 50th Anniversary Roast at the Elbow Room in Ypsilanti, MI ... anyone who appreciates Deming should mark their calendar for 2-19-2010 and make the scene to slap a genius on the back and see the debut of his latest band, Mark Lansing and His Biscuit Eaters (featuring former members of Piss At Midnight, Bad Oskar and Down MF). Cover ought to be reasonable. As for JLR & TGT, filling a setlist was easy, but next comes the slow, grueling rehearsal process as we pit pedal steel against twelve strummed strings and find common ground between the beards and the sideburns. Check out our preliminary work (recorded by Tim Pak at Woodshed Studio in Detroit) on MySpace, two songs by JLR that run the emotional gamut from vengeful to defeated, or fan us on Facebook, if you're one of the 350 million.
Posted by fc at 2:36 PM 1 comment: Links to this post
Older Posts Home
Subscribe to: Posts (Atom)