Pat Todd & the Rank Outsiders
Posted by fc at 7:41 AM No comments:

Finally, a sport I can appreciate penetrates the Olympic games.

It's official ... I have a new gig come Monday, a "writing" job of sorts for these jokers. I'll be knocking out product descriptions for an online catalog, dozens per day for the next three or four months. Thanks to my pal Kate for hipping me to what was happening. They hired me quickly after the interview, but I had to think twice about taking the job, since they not only ran a criminal background check, but also a drug screen AND a fuckin' credit check. Is a credit check de riguer these days? Even for a temporary employee who won't be working anywhere close to cash of any kind? Does this mean that if I had bad credit I'd be denied the employment which might actually help me erase the debt? And don't get me started on the drug test ... anyone who knows me knows where I stand on that sickening issue, but I submitted without protest because I could greatly use a fresh tech writing gig like this on my resume. I'd like to swear that I'll never sell out so hard again, but I guess in this increasingly paranoid, oppressive America we're stuck in that just isn't something I can promise to myself. How soon before the government starts making us take urine tests to get our drivers' licenses? Before I'm dead, I reckon ...

It's too bad I have to interrupt my service with Westward Seafoods, the temp position I've held for over a year and a half. The work is desperately boring at times, but I've never worked in a nicer office ... while there's no one here to argue about Blue Oyster Cult records or Doris Wishman films with, everyone is friendly and laid back, and if there's any backstabbing office politicking going on, I haven't seen it. So far I've received a free donut and a lunchtime pizza for my farewell, and I hope it doesn't go much farther, since I hate goodbyes. Besides, I actually have a lot of work to do if I'm gonna clear my desk before I clear out. Speaking of which, I must get back to it ...
Posted by fc at 10:10 AM 1 comment:

If that didn't convince you, dig this song the director John S. Rad wrote about his creation.
Posted by fc at 1:41 PM No comments: 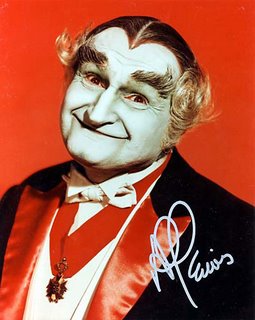 Another strange icon of my youth has gone to glory. Along with The Monkees and The Addams Family, The Munsters was a highly influential television program for me during my childhood. In the early 70s it was always on some channel or another in syndication, and I lapped up every episode. These shows clearly shaped my tastes and general aesthetic, and far as I'm concerned I'm better for it.

Al Lewis' long, strange trip is ably recounted in this CNN obit, so if you didn't know about his basketball career or mayoral candidacy, take a look. Good night, Grandpa.
Posted by fc at 1:23 PM No comments:
Newer Posts Older Posts Home
Subscribe to: Posts (Atom)