As it turns out, my life was spared and the plane landed safely, twice. Michigan was five long days of drinks, drugs and ... Detroit? Fuck it, that's good enough. I don't have the time to alliterate for free.

Mike and Stephanie's wedding celebration was a blast in Lansing, thanks to a fine soft rock soundtrack curated by Diamond, a full bar and a gaggle of folks I hadn't seen in coon's ages. No camera this time, so I can't regale you with unflattering snaps, but suffice to say there was an equal mix of bad behavior and tender reminiscence, so the event was quite satisfying.

I also spent quality time with Suzi, a stand-up dame and mother of two better known for her work with Crotch. We drank extremely good rum while her insane genius children ran wild and her stoic, long-suffering husband Mitch casually absorbed the mayhem. Two things I learned from this experience, kids hate to be stung by bees and you have to be careful when you give them Pixie Stix, because that stuff is like bleach if you get it in the eyes.

A few hours of sleep under my belt and it was time to head for Detroit's Analog Giant to lay down hasty tracks for another hotly-contested Seger Liberation Army release. Thomas "Jackson" Potter played ringmaster, Nick Dirty handled beats and Mike Walker and Diamond took turns on bass. I played some of the worst guitar of my life, but thanks to Jim's magic touch my slob-handed riffing ended up sounding "eccentric" rather than "shitty." That's what I keep telling myself, anyhow. In future years impressionable kids will be studying my surreal take on Bob Seger's "Down Home" riff, trying in vain to capture that mangled, broken-finger style I so effortlessly pulled out of my ass with the aid of bourbon, coffee, vicodin, ritalin and some other stuff I'd rather not discuss. Diamond's Telecaster was covered in blood when I finished my licks, a testament to how hard I rock even in the most primitive of circumstances. Tommy's vocals were as strong as anything he's ever done, Mark Deming drove four hours to lay down some rousing backups, and I'm sure that the end result will please anyone who enjoyed the original SLA material. Hopefully Big Neck Rex will have the CD out in time to piggyback on Old Man Seger's comeback LP and tour.

As much fun as I had, I was ready to kiss the fucking ground when I got back to Seattle. Since then I've been trying to catch up at the temp gig, applying for a couple "real" jobs that I don't want, banging my head against a wall with Resonance and working on End Times material ... I finished another new song this weekend, a gentle, doomy folk musick meditation on the apocalypse. You stupid kids are all gonna love it.
Posted by fc at 9:09 AM No comments:

The celestial gambler.
Posted by fc at 6:12 PM No comments: 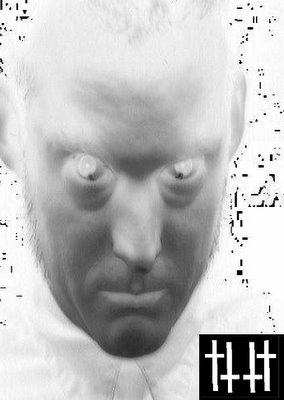 Please be advised that this new portrait replaces any and all publicity photos previously distributed by the management. Dr. Frederic Killingsworth will issue quarterly press statements regarding the progress of the Finite Spirit Foundation and will take no further questions from the media. Thank you.
Posted by fc at 5:11 PM 238 comments:

Okay, this makes me feel better.
Posted by fc at 6:52 AM No comments:

Thanks a lot, humanity. I blame each and every one of you for this.

Terrorism exists because everyone is stuck stubbornly in their own little reality, buying into some big lie be it religion, capitalism, hedonism, rocknroll or "the nuclear family." It's all the same, just different ways to distract our over-functioning brains while we eat, sleep and mate our way through a lifespan. But you morons just can't accept that none of this matters, you have to invade each other's territories, blaspheme each other's gods, steal each other's natural resources and blow up airplanes whenever no one is paying enough attention to you. You all make me sick, down to the last man, woman and child.

So now I gotta fly in a goddamn airplane next week (which I already hate) with this hanging over my head (well, if the Northwestern staff doesn't go on strike first, but that's a whole other rant). Even if nothing blows up air travel is going to triple in obnoxiousness over the next few months. All because I want to go visit old friends and there's no real alternative to flying if one wants to travel. Will some fucking genius figure out how to make trains run on time, or invent some kind of electric car so people can stay connected with each other AND NOT HAVE TO RELY ON FUEL THAT REQUIRES US TO FUCK WITH OTHER CULTURES THAT DON'T WANT TO GET FUCKED WITH? Jesus.
Posted by fc at 10:08 AM 1 comment:

Joyner gives it to us straight. 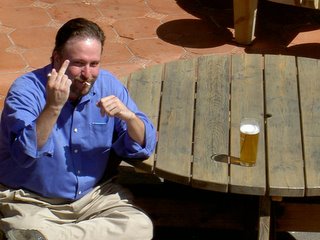 The Peacock Throne resumes transmission from Europe, where Scott #2 is on an important fact-finding mission for an underground conservative think-tank. Everything is written in code, so if you don't get it, it's because you're not supposed to.

By the way, I looked into the future, and in thirty-five years this guy will be pope. But by then that position will be largely ceremonial and won't wield much power.
Posted by fc at 9:12 AM No comments:

Happy Birthday, Grandma
Posted by fc at 12:07 PM No comments:

In case you just bought a theremin and have no idea how to play it.
Posted by fc at 7:47 AM No comments: 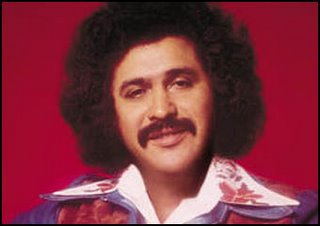 Freddy Fender discusses his cancer with bravery and dignity. "I cannot complain that I haven't lived long enough, but I'd like to live longer." Now THAT'S a man.

I've been a Fender fan for many years and recall the awe I felt watching him perform with the Texas Tornadoes about a decade or so ago. Crammed into a tight tuxedo, that wild Larry Fine hair flying and Pancho Villa moustache taking over half his face, well into middle age but still able to effortlessly drive women into a frenzy with his romantic balladeering. I won't lie, I was there to see Doug Sahm that night (I brought my beat-up copy of Mendocino for an autograph, waited by the stage door for an hour but struck out, only managing to wave the LP at the Tornadoes' limo as it pulled away forever), but Freddy Fender stole that show, and all the swooning Mexican housewives in the audience would agree with me.

I wish Mr. Fender a long, comfortable convelescence as he goes proudly into that good night. Tell Doug I said hello.

Freddy Fender Official Website
Posted by fc at 10:36 AM No comments:

Can we just step back for a second and reread the caption to this picture? "People in Miami's Little Havana celebrate the news of Castro's illness."

I know he's well-hated, probably deserves to be (most of us do) but just how disconnected from our own humanity are we gonna get? I'm sick of all of you.
Posted by fc at 8:20 AM No comments:
Newer Posts Older Posts Home
Subscribe to: Posts (Atom)