Thanks Henry. This is the transitional band I played in with Soren, Jim Diamond and Tim Ford for one glorious summer. El Smasho had just broken up (badly) and Diamond had just returned to Lansing from Austin, where everything had gone wrong, so we all healed together ... I learned a lot just by watching Jim play, and when the Pop Tarts were finished, Soren asked me to join The Apollo Nine, which is where I learned everything else I know by watching Aaron Vanderpool.

I had already met my future wife Lori by this point (at the first Pop Tarts gig a week or so before), but this is the show where I noticed her in the way a man notices a woman. She still had braces then, but she was essentially legal (19 years old) ... anyhow, we didn't get together for at least a year after this. Lori is the girl in the blue and white shirt on my side of the "stage."

We played many bigger and better shows than this (our house party appearances generated genuine teenage mayhem), but we're lucky this one got captured ... the grand opening for Gen X, an East Lansing comic book/video store, where I first encountered the Something Weird Video company and realized that everything I ever dreamed of as a child was possible.
Posted by fc at 8:15 AM 1 comment:

We got it. Lori and I signed a lease last night for the house I mentioned a few posts ago, after a long, frustrating wait ... the owners aren't landlords, they're a young couple with a gaggle of kids who outgrew the place and moved across the street, so they were less eager to rent than to sell. We liked the place enough to start the process of making an offer before another buyer beat us to it. Lucky for us but not for them, the financing fell through and the owners decided to cut their losses and rent to us for six months before putting the house on the market again after the spring thaw. If we love it as much as we think we might, we'll put an actual offer on the table, but that's way up in the air. It's a small house, one true bedroom and two extra rooms that lead into each other without doors -- they're marketing the place as a two bedroom, but those other rooms don't provide much privacy, so they'll be a library and an office for us. A basement again after so many years, plus a big private backyard where Lori can garden (if we decide to stay, that is) and a reasonable walk to campus. It's been a decade since I lived in a true house, not since leaving Michigan in the first place, and I never really got used to the constant flow of apartments I endured in Chicago and Seattle. We'll still be looking for a permanent home, just to keep our options open for the next half a year in case something else smacks us in the face, but this place is a perfect location, decent size and in our current price range, plus we both responded to it immediately, so perhaps South Boulevard will end up being home.

My debut with Jeni Lee went fine, no meltdowns of any sort. It's time to build again ...
Posted by fc at 12:57 PM No comments: 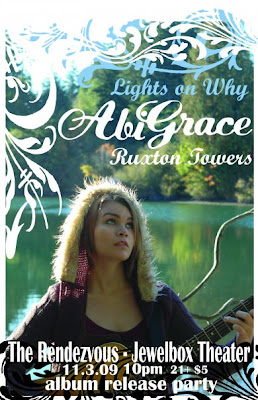 I won't be there. I'll have school the next morning.

I am indeed taking a class, virtually, through Washtenaw Community College with hopes of professional advancement. It all starts today at 3:00pm, and since it's online only, I'll have to do my business in public at the coffeeshop of my choice (although there's a certain laundromat with wifi I've been frequenting lately that's much more comfortable). I am a very bad student, barely managed my college degree, so this will be an uphill battle for me. So why not add to the stress of moving cross country to the state I once fled forever, searching for a permanent home before the next month is up, sorting out my employment possibilities in a depressed local economy and all the other stuff that I'd rather not get into right now? At least I'll have lots of time to procrastinate.

Friday night I'm going to be joining Jeni Lee Richey onstage somewhere in Plymouth for four songs (maybe five? the new one is coming together quickly). This will be my first public performance in Michigan in a decade, not since the End Times 1999's last show in Lansing, which I played with my back to the audience after some unpleasant inter-band tension. Here's hoping Jeni Lee and I can make it through the rest of the week, at least ... anyhow, I'm not going to tell you where this place is, I'm not asking you to come, just making conversation. What's up with you?
Posted by fc at 5:08 AM No comments:

As alive as a music sequence can get, the raucous final scene of Simon of the Desert. Check out the gal in the plaid print outfit at 3:20, she's outtasite ...
Posted by fc at 4:03 PM 1 comment:

Christmas just keeps happening, year after year, as sure as the rain.
Posted by fc at 3:44 PM 1 comment:

My latest favorite song, "War Eternal" by Cirith Ungol. You can get the whole record here ... while you're checking out that particular heavy blog, don't miss Satan's Massacre (imagine two 14-year old nerds trying too hard to sound evil) and Black Task (pretty ragin' occult-themed thrash).
Posted by fc at 12:18 PM No comments:

RIP Dickie Peterson from Blue Cheer. And Brendan Mullen too.

Enjoyed an encouraging first practice with a new girl, this round goes to my long lost pal Jeni Lee, who I worked with at a now-defunct hipster boutique in East Lansing some twelve or thirteen years ago and haven't been in touch with since. She responded to my ad for lady vocalists, unsure if I was who I seemed to be, but since I am and as we are both fans of serendipity, we've tentatively joined forces to work out a few demons together. It's not The End Times ... far as I'm concerned nothing without Tyson and Abigail can be (although I've been disloyal before), but we ran through four of my big hits last night and might very well be on our way to something else. Maybe an appearance at one of her upcoming solo performances if practices prove fruitful, but more on that later. In the meantime, meet my new/old friend Jeni Lee.

As for The End Times LP, production continues, and while I expect to have physical copies in hand before the new year, it's looking like an early 2010 release for us. Following that, I hope conditions allow a chance to reunite with my fallen soldiers and storm a little bit of the West Coast, but I've come to understand that hope is a useless thing ... who knows if we'll even have a West Coast come 2010? For all we know apes will be our masters by then, trees will be extinct and the oceans will become flammable. But as long as boredom reigns, all things are possible, no matter how improbable.

Haven't bought tickets yet for the Roky Erickson show on Devil's Night yet, but I probably should (should probably arm myself before heading into downtown Detroit on the most violent night of the year as well). Diamond is bassing for another Rationals "reunion" the weekend before which ought to be a riot of a different kind. And Lori's off to Portland for a weekend conference mid-month, and I have not yet decided how best to misspend my time alone ... I am open to suggestions.

PS. Welcome back.
Posted by fc at 8:46 AM No comments:
Newer Posts Older Posts Home
Subscribe to: Posts (Atom)