The Lime Giants pose in between sets as the house band for Okemos High School's 1990 prom. Looks more like 1984, if you ask me.
Posted by fc at 3:27 PM No comments: 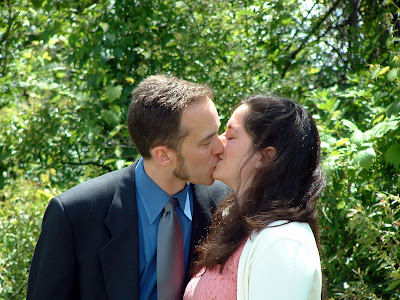 "The hammer of freedom smashes evil!" Seriously, you gotta check this out. It's completely fucking retarded. You'll love it.

"On September 11th of 2001/When we turned on the TV, it was not fun/Some terrorists attacked the twin towers/Then they hit the Pentagon within the hour/Now America's at war/What the hell is going on?" 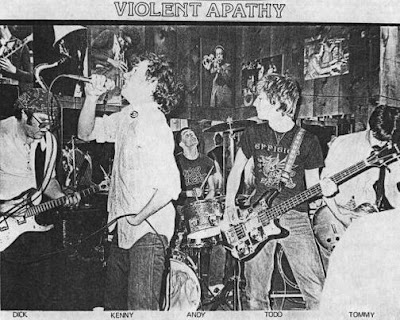 I really wish this article was a little more dynamic and had fewer name-dropping shenanigans (I suppose you need to mention Rollins, Danzig and Nirvana to prove to the clueless that Violent Apathy mattered), but it's still cool to see Capital City rock veteran Ken Knott celebrated in as square a forum as this. And why no mention of the vinyl records they put out back in the day, that now go for big bucks when and if some lucky collector comes across one? Focusing on their cassette-only releases and saying that Kenny started the Students for Progressive Action organization simply because "shows were hard to come by" makes them sound like small-town losers. In many respects they were, but their goals and achievements were certainly greater than the average bonehead frat party cover band most universities spit out by the thousands. Anyhow, congrats to Ken for reuniting his balding, paunchy first-wave hardcore compatriats for these shows, and if you're in the Michigan area, check it out ... no matter how out of practice they are, Ken Knott always puts on a memorable show.

PS. I just reread that article and got even more annoyed. I'm pretty sure Dave Grohl considered watching Violent Apathy to be a "formative" experience, not "formidible." Also, the article first announces that the Lansing VA show is on June 24th, but at the end it's listed as June 25th. I know deadlines for dailies must be tight, but come on ... and I gotta say it again, do we really need 68 words on Henry Rollins? I think I know the writer of this article, too, if I remember correctly he wrote for Etch Magazine back in the 90s and gave my former band the Clutters our one and only rave review, so these criticisms hurt me all the more. But these things matter, dammit ...

PPS. This VA piece in Lansing City Pulse is only marginally better. So hardcore punk has suddenly undergone an "unprecedented degree of commercial success?" What is he talking about? It makes me wish I could move out of Lansing again.
Posted by fc at 12:01 PM No comments:

The Stranger visits 30 churches with mockery as its only intention.

Hands down the most offensive Stranger article yet. I appreciate that they're all atheists, understand that many of them are gay and thus knee-jerk anti-Christian, but invading the sanctuary of people who actually believe for the sole purpose of flippancy is revolting. When someone takes their religion into the streets and bangs you over the head with it, you got the right to snark and sneer, but many of those people simply crave the warmth of ritual and the comfort of their conviction that something exists beyond death. Leave them the fuck alone.
Posted by fc at 10:21 AM 3 comments:

How well do celebrities tip?

Although my negativity in the previous post was genuine, I have to report that things are smoothing over and I'm acclimating to an open-ended 9-5 M-F existence again. The constant scurry of freelancing was killing me anyhow - the eternal search for gigs, the uncertainty of payment, the inevitable betrayal of my talents in pursuit of dollars. A few outlets remain ... The Stranger still likes me, it seems, and while Jason's skipping out on Seattle Sound I oughta still have a venue there, too ... so if I ever really have something to say, I can say it, and when the checks come it'll be disposable income rather than essential. Next up: a "thinkpiece" on GG Allin requested by The Stranger. My whole life has been leading up to this point.

Lori and I bought a car, a slightly-used black Scion with double sunroof and MP3 player. No cruise control, unfortunately, which would have come in handy when we drive to Michigan the first week of July for a family reunion. Our final day in the Big Mitten will be spent at an undisclosed recording facility tracking with the End Times -- the kids are flying and driving in seperately to join me for a quick session. When we return we'll press up some demos and get a little more aggressive in soliciting clubs and labels.

Anyhow, our time in Michigan will be limited but with any luck we'll be able to grab at least one evening out with old friends. If there are any extant, that is. Get in touch, let us know what you're doing the week of July 4th.
Posted by fc at 12:42 PM No comments:
Newer Posts Older Posts Home
Subscribe to: Posts (Atom)