The End Times sessioned at Egg Studios last weekend under the firm yet gentle hand of Conrad Uno, a name I knew from a lot of records I never listened to back in the mid-90s ... Fastbacks, Supersuckers and some lesser Mudhoney releases (not to mention the nightmarish Presidents of the United States of America), platters I'd see in the collections of friends but never collect my own self. Who knew I'd end up there a decade later?

Conrad was great, however, very much in the Diamond tradition, easy-going and fun to record with, reasonable rates and top-notch basement facilities -- I fully endorse Egg Studios for anyone seeking affordable documentation. We put down eleven songs in fourteen hours, a ludicrous plan even for such a small, well-rehearsed configuration as us, and I'll never do it like that again. Next time I take more time.

After several days of listening and relistening, I can't tell which songs work and which don't ... if anyone wants to lay some fresh ears on this material, let me know and I'll forward a couple MP3s.

I've been deeply moody for many weeks now, waking up daily at dawn no matter when I drop off to sleep and just barely functioning. I see spots every day, minor hallucinations dancing in the space between my eyes and the things I must force myself to reckon with ... with luck this house of cards will complete its collapse and I can return to rebuild.
Posted by fc at 9:49 AM No comments:

Ye Gods, but weren't the Kids In The Hall lousy last night. WaMu Theater is a fucking monstrosity to begin with, an utterly inappropriate venue for sketch comedy, but of course, this reunion tour has nothing to do with comedy ... it's all about trotting out familiar characters so their fans can hoot and holler and celebrate their memories of what used to be. Dull, unfunny sketches openly mocked heterosexuals and Christians with no other aim than playing to their demographic, putting the Kids in the same camp as Larry the Cable Guy. Lori and I were over it after fifteen minutes or so, but stuck it out for forty-five before finally accepting the loss and cabbing back home.

Lori was a rabid Kids fan when she was in high school, she even took the train to Toronto to watch one of their TV show tapings back in the day, so when the tour was announced I made sure she knew, thinking she'd be hot to see it. Turns out she had major reservations, but bought tickets thinking that she was doing me a favor since I had brought it up in the first place. So we're out about a hundred bucks, Gift of the Maji-style ... another lesson for you young couples out there to keep communication flowing with your significant other.

Before the show we hit a nearby bar/restaurant and saw a few of the Kids leaving after their pre-gig dinner. Dave Foley slouched along behind the rest, looking fat and unhappy ... in his early post-Kids career he was adamant about not beating a dead horse and insisted that there would be no KITH reunions. Those statements must be weighing heavily on him now, even as his accountants tally up his earnings for this tour.
Posted by fc at 8:10 AM 3 comments: 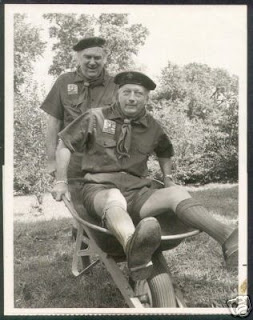 Anyone hep to Bob and Ray? Check out this large collection of vintage Bob and Ray radio programs which have been going a long way towards making work, and thus life, bearable for me lately.

Speaking of work, I'm in the process of busting myself down from full to part time at my day job ... I actually quit in frustration after nearly a year of endless numbers and grotesque piles of wasted paper, but the company valued me enough to suggest streamlining my job into a 4-hour workday. It's really quite remarkable, and if this plan works my lifestyle will be much more comfortable, with more time for my various esoteric pursuits (although to make this work I will have to be at the office by 8:00am every morning without fail).

Also, I'm putting together a choir for a recording project to be launched at the end of July. Anyone in the vicinity who thinks they might want to spend some valuable weekend afternoons singing words I wrote in the company of strangers should contact me immediately. Actually, we have plenty of time, so whenever you get around to it should be fine.
Posted by fc at 10:26 AM No comments:

"When I graduate I'm gonna cut the soles off my shoes, sit in a tree and learn to play the flute."

Click here to watch a television commercial for the Firesign Theatre discography.

Cop more vintage Firesign at Frenzy of the Visible.
Posted by fc at 4:59 PM No comments: 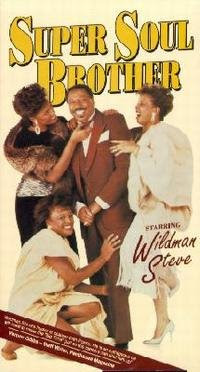 A pair of crooks pay a midget doctor $6,000 to concoct a serum that will give them super strength in order to pull a major jewel heist. The drug works, but the user will die a week after taking it, and the antidote has not yet been finished. Anxious to commit the robbery, the hoods decide to pick up a wino off the streets and trick him into taking the serum and assisting them in the crime. They wind up with Steve (Wildman Steve), a pitiful derelict who accepts their offer of fine threads, a new apartment and all the fried chicken he can eat. The serum works, and Steve finds that he has the ability to bend solid steel bars with his bare hands and lift a two thousand pound safe over his head. Oblivious to the deadly effect of the drug and believing that the jewelry heist is merely a practical joke, Steve helps the criminals pull off the robbery. When Steve discovers the truth, he panics, but luckily the doctor's beautiful assistant Peggy (Jocelyn Norris) has fallen in love with him, and together they work to finish the antidote and foil the jewel thieves.

Comedian Wildman Steve (aka Steve Gallon) was an ex-disc jockey who made a series of raunchy "party" albums during the 70s. After appearing in fellow traveller Rudy Ray Moore's 1977 blaxploitation epic The Devil's Son-In-Law, the Wildman must have figured he could make it big as a raw, low budget action comedy star as well. Pairing up with director Rene Martinez, Jr., they headed down to Miami and cobbled together this threadbare, confounding chunk of no-budget funk. Super Soul Brother suffers from wretched non-acting and simple-minded plotting, with sloppy cinematography and hotel room sets. It's dull-witted, unfunny and poorly executed in every way. That being said, however, Super Soul Brother is a must-see for blaxploitation fans, not only as a benchmark of quality but also to savor the performance of Wildman Steve. The Wildman has enormous charm, enough to carry him through the lamest jokes, even when he's ad-libbing his lines and repeating himself ad nauseam ("You want me to lift that safe? Man, I can't lift no safe. Ain't no way I can lift no safe."). With the right collaborators, Wildman Steve may have had a chance, but this amateurish mess was no way to build a career. The film concludes with the defiant claim that "This Nigger Will Be Back!" It was not to be. FRED BELDIN
Posted by fc at 10:25 AM No comments: 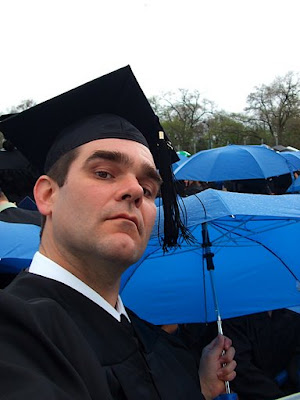 Soren is now legally licensed to cut hair in the city of Chicago, but he still needs to keep his day job teaching inner-city juvenile delinquents about history ... like there is such a thing. Anyhow, he just graduated, so that's cool, maybe his mom'll get off his back now and he can start a band again.

Why do you look so much more like Morrissey with each passing year? 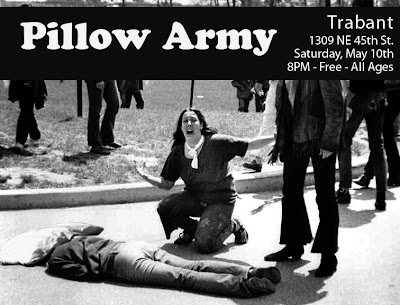 Really, it's a righteous flier, Tim.
Posted by fc at 7:50 AM No comments:
Newer Posts Older Posts Home
Subscribe to: Posts (Atom)