So, here we are, packing out the apartment on the hottest day in Seattle history. We are out of our minds. Last night's Desperado show found me on stage in shorts, drinking vodka, playing every song in new tunings and facing an audience at an hour when I'm usually either sleeping or being startled awake by one of my night terrors. In other words, sheer chaos. Sorry if I was a little glassy-eyed last night, everybody ... I'm feeling overwhelmed by the gravity of our path.
Posted by fc at 5:07 PM No comments:

Last Saturday's End Times LC (Left Coast) show fulfilled every wish I harbored for it, and despite some slight exhaustion on my part we performed up to code, and perhaps even beyond it. My life with Lori is consumed by boxes and the day leading up to the evening of the show was spent finishing mixes on five of our eleven completed tracks so we'd have something to pass around to interested persons (while still not "finished" officially, the Three Dead Crows EP can be had for asking, and a few new tracks are up on MySpace). The heat, the traffic, the terror ... Abi kept me sane in the dressing room by talking me through a mild freakout (oh my God, thank you) and then we just did it like we always do, except perfectly and for the last time for a long time. But I hope not forever.

Tyson remarked on Saturday afternoon that I hadn't posted anything about the show here, as is my habit, and while the big reason for that is The Big Move (we roll out Friday morn) and all the activity that generates, the little reason is that I can't get my words together for what the End Times (past and present) meant to me. Both Tyson and Abi eulogized the band, saying far more than I can right now. But I have the feeling that I'll be writing about all this for the next decade at least ... these kids have given me much to consider.

Today is Tuesday, right? That means Desperado plays the Jewelbox tonight, so come see that, we'll be playing the exact same set you loved so much at the Wild Rose last month. We're on late, so plan accordingly. 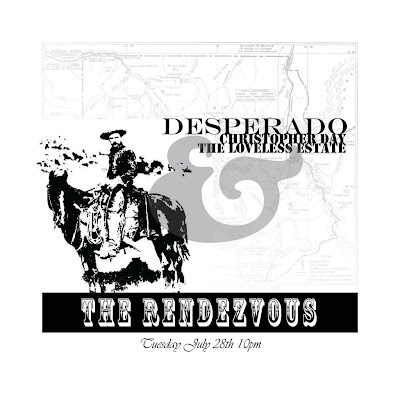 PS. Lori and I have enjoyed an outpouring of love and support from a lot of friends as we prepare this transition into the next world. Thank you. 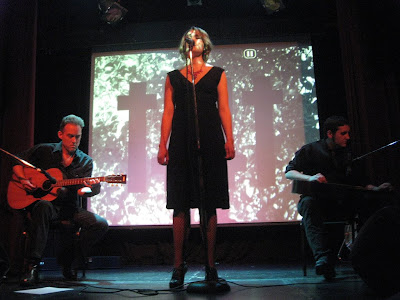 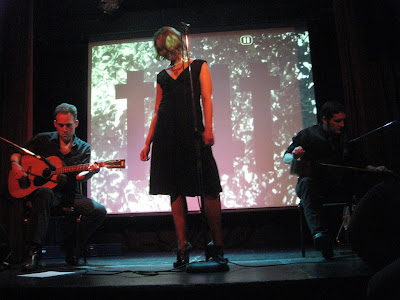 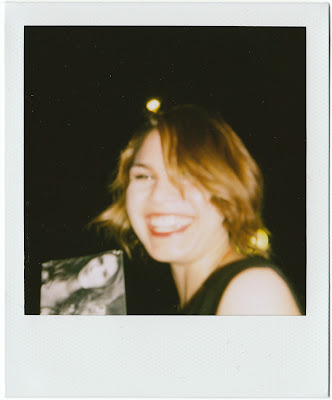 Last night's End Times show was like this.
Posted by fc at 10:30 AM No comments:

You ever seen Targets?

Curiously, there's no mention of Boris Karloff, who turns in a great late-career performance in a pivotal role as a burned-out old movie star. At least he gets a brief salute in this next trailer ...

Anyhow, it's one of my favorite films, and its available for screening in its entirety on YouTube.
Posted by fc at 3:58 PM 2 comments: 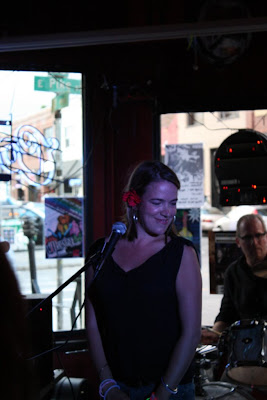 One more shot at Desperado before I blow town (and the perfect excuse to post this lovely photo of Jeannene) ... we'll be slugging it out with the Linda Ronstadt songbook Tuesday, July 28th at the Rendezvous/Jewelbox Theater, performing with The Loveless Estate. Time and money TBA. It ought to be a riot.

We got a lot done at Egg yesterday. Good results very soon ...

I have been in denial about moving for the past few weeks, and am only now grasping the enormity of the task ahead. Boxes are being prepared, plans drawn, and it all needs to be done by July 31st. In the meantime, I hope to see everybody I like as much as possible. What's everyone doing on July 26th? It's a Sunday. We might have a garage sale somewhere.

Lori's been out of town all weekend (a librarian's conference in Chicago), but I kept myself busy and alive for two full days, so far so good. There's only 18 more hours for me to get myself into trouble ... universe, do your thing.
Posted by fc at 5:59 PM No comments:


How many music videos end with the guitarist shooting the lead singer in the back? At least one ... a stirring anthem of courage in the face of blindness and choosing righteousness over the petty laws of this bastard earth.

It's a hard film to find, but if the prospect of seeing a twitchy, bug-eyed Johnny Cash use six-year-old Ron Howard as a human shield during a violent shootout sounds promising, then Five Minutes to Live delivers in spades. This long-lost picture starts off with Cash riddling a policeman with machine gun bullets and never lets up, piling one raw act upon another with the Man in Black turning in a wild performance as a feral killer. In nearly every scene Johnny is either wielding a weapon or obsessively strumming an acoustic guitar (the tasty riffs he picks were post-dubbed by co-star Merle Travis), and Cash channels something very dark and very disturbed in this role. He nearly trembles with his aggression, and it's clear that if Cash hadn't been the seminal music figure that he was, he could have had a fine career as a Hollywood heavy. Director Bill Karn gives Five Minutes to Live a breathless, desperate energy that transcends its obvious exploitation roots, sometimes coming close to capturing the same vibe as Russ Meyer's early black-and-white melodramas. The film also takes a healthy satirical poke at the sterile face of suburbia, a theme that hadn't yet become standard in American cinema. The Wilsons put on a good show for the neighbors but their lives are a mess of hangovers, adultery, and lazy parenting. When Johnny arrives he makes his disdain for their lifestyle plain, muttering "I never saw so much of nothin' in my life," and smashing the tacky knick-knacks that decorate the Wilson home. There are a few loose plot devices that need tightening, but with a film that moves this fast and furious, it hardly matters. By the time this thriller was re-released (with the lurid moniker Door-to-Door Maniac), Cash was on his way toward cleaning up his own troubled life and embracing Christianity, which might explain why such a vicious portrait remains difficult to see. However, while Johnny Cash's larger-than-life persona depends on his image as an elder statesman of American folk music, there are plenty who still relish his early hell-raising days, and Five Minutes to Live is the film that those fans need to see. FRED BELDIN
Posted by fc at 5:43 AM 1 comment:

I was feeling perverse this morning, so when it came time to fight my exhaustion with a stimulating drink I opted to spend an extra buck for a "Jimi Hendrix Liquid Experience," the latest cash-in from the psych-guitar legend's estate. The packaging finds our hero surrounded by flames (is he in Hell?) beneath a bold promise that the beverage will provide peace, love and purpose. I don't know if that's truthful advertising, but the can is packed with almost 200mg of caffeine along with the usual vaguely-recognizable pharmaceuticals, and the taste is refreshingly tart unlike similar sickly-sweet energy drinks.

I can't help but think that if only Jimi had a can of this stuff by his bedside that fateful night, he might have been wide awake when the barbituate vomit started bubbling up and would still be with us today, performing slick, overly-reverent blues pop for Baby Boomers ala Clapton ... perhaps he might have even been among the performers at Michael Jackson's funeral, hushing the crowd with a mournful, spiritual version of the "Beat It" solo after a warm reminiscence of mentoring MJ in the early days of his pop/R&B crossover success.
Posted by fc at 8:42 AM 2 comments: 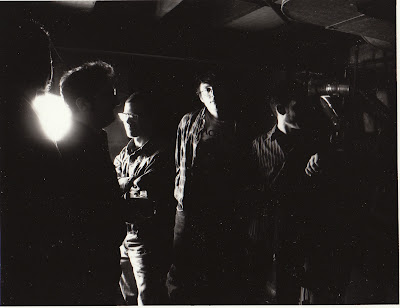 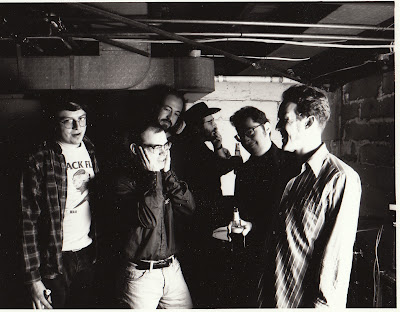 Uncovered in early preparations for the move ... alternate press shots of The Clutters, Lansing's first and only alt-country band in two distinct moods. My basement in Michigan's capital city circa January 1997 -- that's right, kid, before you were even born.

Now THAT'S how you write a headline, CNN. Too bad it got buried under the coverage of the big funeral ... say, when are they burying Sky Saxon, does anybody know?

In other important media news, Joe Carducci has a blog now, or at least he's one of the contributors. I'm still hoping he has one more book left in him, so I'll keep an eye on it.
Posted by fc at 3:24 PM No comments: 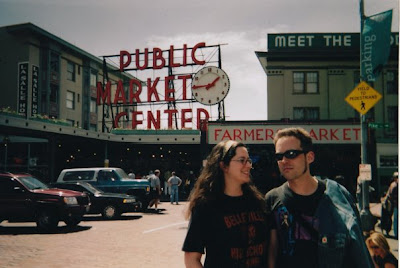 We've been sitting on the news for a while, waiting for contracts to be signed and essential people to be notified (employers, parents, Tyson), but Lori and I are going to be moving to Ann Arbor, Michigan in August. She accepted a science librarian position at University of Michigan, and I'm proud to say she was courted and pursued by the school the whole way ... we love Seattle and don't really wanna leave the Left Coast, but we've both had employment struggles over the past year, so this is an uplifting development for sure.

I'll have a lot more to write about what I've done and seen over seven years in this city as days progress, but right now I'm hoping for some loose ends to resolve themselves before I close this bittersweet chapter once and for all. For everyone in the Big Mitten, we'll see you in a month and a half ...
Posted by fc at 11:18 AM 1 comment: