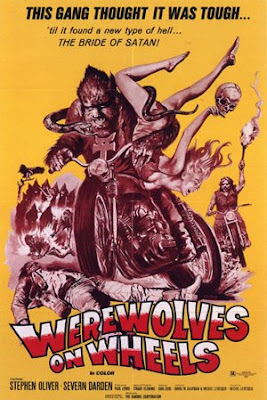 The title promises ludicrous thrills galore for the psychotronic film devotee, but Werewolves on Wheels isn't quite the wild genre mash it pretends to be. More biker flick than horror show, more head trip than action film, it possesses elusive charms that only the most dedicated trash fan will be able to uncover. Director Michel Levesque has his bikers and Satanists clash quickly, but after a sinister ritual sequence and a quick monk-bashing brawl, the boys get on their iron horses for a long, slow ride that will test the patience of anyone expecting lycanthropic violence. Surreal psychedelic touches that might be groovy to those in certain states of mind should prove sleepy to anyone else, as the bikers drift into fogs of wind-blown sand and set fire to abandoned cars in the middle of the desert. Other than a few nighttime werewolf attacks, the viewer gets improvised campfire rap sessions and genre-standard motorcycle road footage. Most of the audience will probably figure out who is responsible for the werewolf killings early on, but even after the monster's fiery revelation, things get muddled even further with freaky flashbacks and satanic hallucinations. Several of Werewolves on Wheels' cast members appeared in Dennis Hopper's infamous 1971 ego trip The Last Movie, and others were professional stuntmen. They're appropriately bedraggled, bearded, and road worn, but these bikers are awful Hollywood, always quick to perform zany skits for the camera and let loose with John Wayne impressions. Werewolves on Wheels can't live up to its high-concept title, but it remains a unique entry into the biker film canon. Check out The Death Wheelers for a more entertaining horror/motorcycle hybrid, made the same year in England. FRED BELDIN
Posted by fc at 9:15 PM No comments:

"My ecstasy is in the conscious awareness of the continuity of existence." 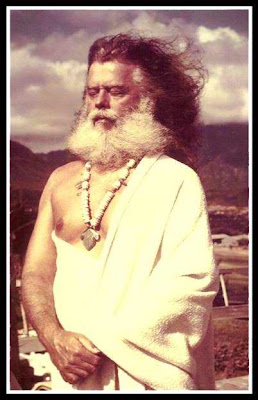 Must be fate ... hitting Hawaii and stumbling upon the music and legend of one Father Yod, a late-60s counterculture guru who formed a commune/rockband in Southern California (funded by his popular health food restaurant) and then moved the whole organization to the islands in the early 1970s. He died shortly afterward in a hang gliding accident, and the family dispersed as the years passed, but someone is selling records and books from a small town near a volcano that we want to visit. Do I dare call the phone number listed?

You can check out some of the Ya Ho Wha records here.

And learn about their beliefs at this official website.
Posted by fc at 11:37 AM No comments: 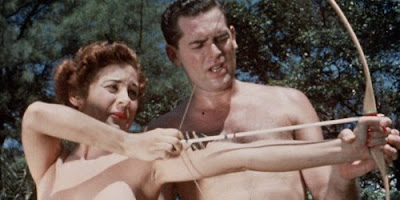 Hideout In The Sun

The clothing-optional lifestyle reforms a criminal in this amusing nudist colony film from prolific exploitation director Doris Wishman. Bank robbing brothers Duke and Steve (Greg Conrad and Earl Bauer) pull a job but car troubles mar their getaway. A young woman in the right convertible at the wrong time provides a solution, so the desperate duo kidnaps the girl and commandeers her wheels. When they learn that their hostage Dorothy (Dolores Carlos) lives and works at a private country club, the brothers devise a plot to hide out in her bungalow while they wait for their boat to Cuba. Since the club is open only to married couples, Duke hides in the trunk while Steve masquerades as Dorothy's newlywed husband, but once past the gate the brothers are shocked to discover that the "exclusive club" is a nudist colony. While Duke hides out with the loot in the cabin, Steve and Dorothy stroll around the grounds in the buff to bolster the bogus marriage story. As the couple spends time together in the sunshine enjoying wholesome activities like volleyball, swimming and archery, love begins to blossom, and soon Steve is questioning his criminal ways.

Doris Wishman's unique career spanned four decades and boasted more than two dozen features, and it all started with this humble yet charming nudist colony film. Wishman had already worked for several years in the film distribution business when an untimely heart attack took the life of her husband. Grieving the loss and needing a project to help restart her life, the young widow decided to make her own movie, choosing the then-spicy (and profitable) realm of nudist colony films for her debut. Funded for a pittance by family members and shot in sunny Florida, Hideout in the Sun made money and Wishman went on to self-finance a steady stream of low budget, high concept adult features that share a distinctively off-kilter flavor. Hideout is atypical of Wishman's oeuvre, possessing a crude yet conventional approach to composition and pacing unlike her later, more eccentric films. However, Wishman's taste for the bizarre is already evident -- she sets Hideout's climax at a roadside tourist attraction called the Miami Serpentarium and dares to inject some film noir sensibilities into the eternally sunny nudist colony formula. Like other genre-standard nudist films, Hideout in the Sun extols the virtue of the lifestyle with handsome, healthy naked folks (genitals always discreetly covered by towel or beach ball) engaged in various wholesome outdoor activities. "Everyone here is so healthy looking, they seem so happy," opines one character, "it's a wonderful way to live and to bring up children." Nary a hint of sexual impropriety exists on the screen, but the audience certainly had prurient ideas in mind for all the nude bathing beauties on display and the legality of these films paved the way for the full-on hardcore assault of the 1970s. Wishman followed Hideout with seven more nudist colony features (including the delirious sci-fi/nudist hybrid Nude on the Moon) before moving on to harder-edged fare as the marketplace demanded. But the innocent energy of her debut, with its clumsy criminals and deadpan lovers, will please those seeking nostalgic thrills. Wishman devotees take note, the director makes a brief (fully clothed) appearance early in the film as an extra -- she's the red-headed woman walking out of the bank during the holdup. FRED BELDIN

Posted in honor of the nude beaches my beloved and I will be seeking out now that we've safely landed on one of the Hawaiian islands (don't recall which one -- I think it starts with a "K"). Photos forthcoming ... thanks for the trip, Mom!
Posted by fc at 10:13 PM No comments:

Despite (or perhaps because of) my shredded nerves and an abundance of existential rage and terror, The End Times acquitted ourselves handsomely at the Jewelbox Theater last night, possibly one of our finest hours. Today I am exhausted, pilled up and mildly hallucinating, but the relative triumph of the evening helps to temporarily allay a few of my many fears. I have miles more to go before facing the all-day flights of Saturday, and none of the energy I need to make it in any dignified manner, so I can't unwind yet ... all is not well, but I put a patch on it.
Posted by fc at 12:49 PM 1 comment:

Another year for me and you, another year with nothing to do. I don't know how many more times I can bounce back.

The band performs somewhere tomorrow, and Lori and I are going to Hawaii on Saturday. See you later.
Posted by fc at 5:41 PM No comments:

Monday, a snack
All the way, bands and running
Clouds, speed
Step on the gas, this is war
Great attention
Traffic jam downtown

Harsh boxer
Just one punch, you knock me out
Shy dancer
Go for the approach and win my heart
I'm easy to approach
With little more than a smile

I stop working as soon as, zap!
My heart is pierced

*from VACACIONES DE TERROR 2
Posted by fc at 3:51 PM No comments: 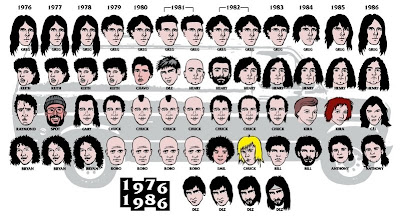 Thanks, WFMU.
Posted by fc at 9:50 AM 2 comments:
The End Times jetted down to Evergreen State in Olympia Tuesday to play on the college radio station KAOS ... and I do mean jet, as I earned my first ever speeding ticket on the drive there, nabbed by The Man for doing 74 in a 60. I pride myself on being a safe driver, but I was overtaken by some righteous Seger on the box and got the leadfoot. My cop looked like Robert Blake and spoke with a vague accent that I can only assume was fake, as the Washington State Patrol is well known for various types of subtle psychological tricks. We hit the studios in plenty of time despite and played a fine set, so all was well, but this project is really starting to cost.
Posted by fc at 7:02 AM No comments:

Time to start combing eBay. I must have one of these toys.
Posted by fc at 3:37 PM 1 comment:
Newer Posts Older Posts Home
Subscribe to: Posts (Atom)