It's been raining every day for weeks. Why didn't somebody warn me about Seattle's weather? I have to say, in the 3.5 years I've lived here, this season is the first where I felt the oppression of the rain. After a lifetime of snow and miserable Mudwest summers, the relatively gentle Northwestern climes were easy to endure. But this winter has been harsh. On Sunday Lori and I had dedicated ourselves to an entire day of relaxation ... no writing, no homework, no Resonance, no job hunting. We got up at 7:00 am and spent the first six hours of the day lounging in bed, eating a lengthy breakfast and watching season three of Dallas . By mid-afternoon we had serious cabin fever, but there was nothing we could do -- the rain was coming down in sheets, hadn't let up all day and we were fucked. Frustration turned to depression and not even six more hours of television could make me feel better.

It looks like I may have another wedding on my hands. My pals Laura and Jay are hitching themselves to each other and have asked me to perform the ceremony. I'm thrilled for them, even if this means I'm gonna have to fly ... they're doing it in Phoenix, AZ and what with our "busy" schedules and Deming's upcoming nuptials, Lori and I just don't have time to get there any other way. I hate to fly. Maybe as minister I'm entitled to a rider, and I can request some narcotics to keep me placid (at least one way). While in town, I'm looking forward to visiting Alice Cooper's Town, sports theme or no sports theme. Is there anything else in Phoenix?
Posted by fc at 4:51 PM 1 comment: 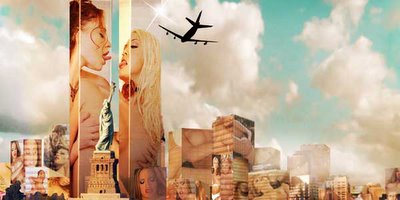 Check out FLESH, now showing at the Sundance Film Fest.
Posted by fc at 3:10 PM No comments:

Too bad. I've always loved Shelly Winters (from afar, of course). Night of the Hunter, The Poseidon Adventure, Poor Pretty Eddie ... just too great films to list. Sweet dreams.
Posted by fc at 2:00 PM No comments:

Jonathon "The Impaler" Sharkey for Governor of Minnesota

"I am a Satanic Dark Priest, Sanguinarian Vampyre and a Hecate Witch. My Magikal Path name is: Lord Ares. I despise and hate the Christian God the Father. He is my enemy." He also wrestles professionally under the name "Rocky Flash" and promises to publicly impale terrorists on the steps of the state capital building. Now THAT'S a candidate!
Posted by fc at 10:12 AM No comments:

Welcome to the future. My new year's eve was spent alone ... Lori was in E. Lansing taking care of her sister's new baby, so I had myself a lost weekend of hard boozing, dark sounds and bleak visions. The results were not surprising to me, my indulgences were physically pleasurable at first but gradually sapped my spirit as I felt myself slipping back into the shadowy solitude I endured while living in Chicago at the turn of the century. I've never had any doubt about my love for Lori, but it's good to have the reality of my good fortune stuffed down my throat once in a while ... at first the novelty of being alone in the apartment was refreshing, but the last few days of her week-long trip I was miserably lonely for her, and once she returned I was again thanking God for her inexplicable devotion to me.

My moods have been rocky of late, I suppose I could blame Seattle's grey skies or insufficent medication, but the end result is the same. I average about 45 minutes of good humor per day, inevitably occurring while I'm at the temp job or on a late night couch in front of some trash with wine on my lips, so my real "work" has been suffering. Resonance duties are always calling, I started a new writing class, a dozen half-baked ideas are getting stale and I have a book to write. Final edit is due on my fanboy interview with Johnny Strike from CRIME for Resonance issue #49 ... that was a personal coup, as Crime are one of those mysterious netherworld rock bands that I've always been fascinated with, but my beautiful and handsome editor Kris is gently demanding some revisions to my immaculate text (he was confused by my reference to the band's "sinister ectomorphic power"). Plus there are emails to be returned, old friends to be called, family members to be written to, all the sort of stuff that should have been tackled over the holidays but wasn't.

Well, that's enough complaining for now. I'm low, but not that low. I need inspiration and energy, though, so anyone with a surplus should call me immediately ... I might not answer the phone, but you can leave a message and I'll get to it within 24 hours.

PS. Friends of fellow genius Mark R. Deming might wanna dig this and shoot him a quick hello. He's had a far worse new year than me.
Posted by fc at 2:47 PM No comments:
Newer Posts Older Posts Home
Subscribe to: Posts (Atom)